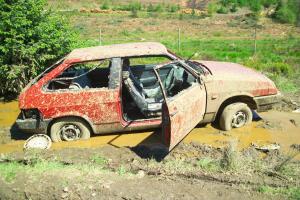 As I unbuckled my youngest from his car seat, I took a look at the back seat of my car.

Suddenly, an unwelcome epiphany crystallized into a dark forbidding mass that could no longer be ignored. This was my epiphany:

What if the condition of my car is an indicator of how I treat my body?

Doesn’t that just make the coolant freeze in your radiator?

I mean, isn’t my car just an extension of my body? It’s a shell I use to get me places. It has fluids, a circulation system, and many other mechanisms of which I am largely ignorant until something goes wrong.

What if my back seat is full of junk food containers, and I don’t fill up the fluids until they’re within a milliliter of being empty? Am I talking about me or the car?

The metaphor gets worse for me. I don’t do the standard maintenance stuff on a regular basis. I ignore funny noises, lights, leaks and other warning signals until I absolutely have to do something about it. What does that say about me?

Usually it’s a money and time thing. I have to spend those things to get problems fixed, sometimes lots of both. Neither of which, I seem to ever have enough of. But is that a reason or an excuse?

I took a pool operations course once (the singularly most boring weekend of my life) and one of the concepts that was discussed (actually, the only thing I remember come to think of it) was…THE COST OF DEFERRED MAINTENANCE (you have to use a low ominous announcer-type voice). This is more colloquially known as “A stitch, in time, saves nine.” Here’s the cycle: you have a minor mechanical problem. It would not take much time and money to fix but it would take some. So, to save the money and because there are “bigger fish to fry” in your day, you do nothing about it. That mechanical problem will inevitably get worse. If you leave it until it IS the bigger fish to fry, it will take much more money and much more time to fix. So, doing the routine maintenance and minor repairs will actually cost you less money and time if you do them sooner rather than later.

Now, it might be prudent at this point, lest you start making appointments for me at the doctor, to let you know I’m not a completely hopeless case. I had a physical less than a year ago, including all the requisite tests, and they’re all good, and if you recall, back to this post, I do something about pain when I have it.

Instead of just being minimally road-worthy, it might be time to get the leaks fixed, the fuel consumption down and the fluid levels kept up. And maybe I need to get the junk food containers cleaned out of the back seat.